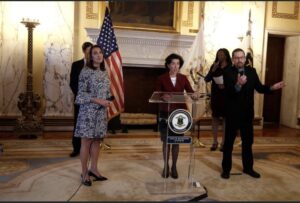 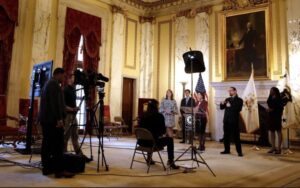 A message to Governor Gina Raimondo regarding her current media policy : “Knock it off.” Like elected leaders around the country, Rhode Island Governor Gina Raimondo holds daily press briefings on the coronavirus however an important component is missing: the press.  Instead of a social-distanced press corp  (who could easily sit ten feet apart), micro-manager Raimondo attempts to orchestrate a performance of her team with questions carefully screened by her staff .  Questions are submitted in advance and delivered through Margie O’Brien, a well liked reporter, who happens to be employed by Capitol-TV ( which is state run propaganda TV ). In other words, the person asking the questions of the governor is employed by the state and thus the governor herself. The Kremlin would be proud.

At different times of the day on cable news we are exposed to various governors and mayors around the country holding briefings on the latest news with COVID-19 and the press is very much involved. At the White House President Trump handles various questions from all media outlets including Trump hostile media outlets like CNN.  In the video below, the Mayor of Los Angeles has reporters lined up by phone and the reporters ask the questions themselves and speak to the mayor directly. Hello team Raimondo?

The State Room at the Rhode Island State House is six times the size of the press room at the White House and the press is still working there.  Local media could easily separate themselves in chairs seated ten feet apart which would allow follow up questions and more pointed questions than the ones currently being asked. Governor Raimondo must move in the direction of transparency during this crisis and allow a free press to do their job. Margie O’Brien could act in the role of repeating the question for viewers perhaps unable to hear on the live feed or still field questions from press who choose not to attend. The curtain must come down on the Raimondo pandemic show (where Raimondo claims girls all over the state play virus briefing with podiums).

Can Raimondo protect Rhode Island from the coronavirus?

Dana Houle, who protected her account and then unprotected it, has selectively deleted some tweets in this thread, but here are screenshots of her interaction. 4

Listen to the most recent episode of my radio show : Odell Ziegler, a Providence teacher, apologizes for Facebook post encouraging burning the city down . https://anchor.fm/john-depetro-show/episodes/Odell-Ziegler-a-Providence-teacher-apologizes-for-Facebook-post-encouraging-burning-the-city-down-ek4kfd

@realDonaldTrump was in rare form tonight at the rally . He is peaking at just the right time and will be on fire Tuesday night at the debate. Relaxed , hilarious and had a great day with his brilliant selection of ACB. https://twitter.com/teamtrump/status/1310014490772148225