What was once a prominent suburban enclave has become a progressive left-led effort to destroy the town and people who live there. Saturday was the low-point as an anti-police hate rally became constant threats of violence to citizens and police officers. Barrington had a race fight between neighbors recently but the confrontation had little to do with the police. Black Lives Matter is a movement involved in protests against incidents of police brutality and all racially motivated violence against black people. So why were members of the Barrington Town Council and Lt. Governor Dan Mckee screaming about ” racist police?” Why were they applauding speakers who threatened violence towards police and other white citizens? Dangerous political pandering in the worst form. 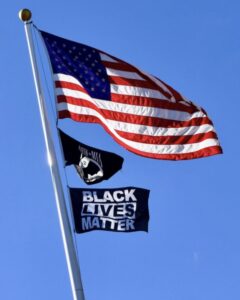 Rioter who tries to block the path of a police water cannon at the Paris riot is dragged out of the way by officers. Mass anti-police violence broke out in Paris against a new security law & alleged racism.