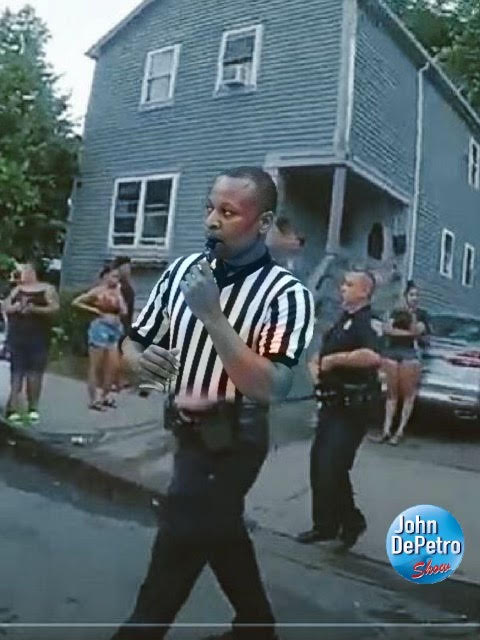 The incompetent reign of Providence Mayor Elorza hit a new low as he chose a basketball referee as a new Providence Police Major. Elorza appointed his Park and Recreation director Michael Stephens to be a Police Major with the Providence Police. Stephens has no police training, will not carry a weapon or wear a uniform. He has no education in policing and is a high school graduate of Central, with no college degree. Stephens runs the Mayor Elorza golf tournament, runs summer basketball leagues and other recreation programs.  During the winter time, normally Stephens would be out of town most as a college basketball referee.  Stephens has serious knee trouble and this year would be unable to make money as a ref, so Elorza made him a high-paid police officer. There is rampant speculation Elorza hired his good friend to help with his campaign for Governor and help the mayor with the black vote. It would appear Michael Stephens was appointed to the rank of Major in a para-military operation because of his friendship with Mayor Elorza, who has been under pressure to appoint a person of color as Major. Stephens will receive a six-figure salary, full benefits and qualify for a city pension as a police major. The Providence Police union offered this statement: Our position is not one against Mr. Stephens on a personal level, he very well may be a gentleman on all levels. This is purely a professional standpoint and opinion. And while the city can appoint anyone to a handpicked position outside of the union, some questions should be asked due to the fact that this is a high ranking position in a major Law Enforcement Agency. Will he be wearing a PPD uniform and badge and carrying a firearm? Does he have arrest powers? If so, Is he post certified and where did he receive his certification? What formal training has he received as a police officer? What qualifications does he have that gives him the law enforcement  knowledge to oversee the training division and the curriculum that is being taught? If the candidate needed all the above qualifications to assume the position, how was he able to secure the spot? It is the FOP’S position that this particular position within the Providence Police Department should have been filled with someone from the law enforcement field that was post certified at a bare minimum. This once again clearly shows a lack of understanding, leadership and arrogance on the Mayors behalf, once again pandering to the political winds. This sets a bad precedent for future appointments of individuals who have no law enforcement experience in positions that clearly call for it… but then again we do have a mayor who had no qualifications to lead a city and we see what that’s done to the city of Providence, so I guess we shouldn’t be surprised.

Does Regunberg send protesters to the homes of Raimondo and Elorza?

BLM apologizes to police for blunder