Ignorant, uneducated, misguided and demented are some of the more positive adjectives to describe Harrison Tuttle the leader of Black Lives Matter-RI-Pac. Turtle compare police using rubber bullets on BLM protesters last summer to the brutal regime slaughtering their own people. Josh Hammer wrote in Newsweek :I have been to Cuba and seen the barren fruits of this hellish, “revolutionary” regime with my own eyes. Parts of Havana are positively charming—the historic parts that predate the revolution, at least—but the majority of the city looks like it was just hit by a neutron bomb. Dilapidated buildings that look like they are out of Mogadishu circa 1993 are the norm. Skeleton-thin stray dogs wander the streets, while locals are usually reliant on government-provided scraps to get by with bare life necessities. The Malecón, Havana’s preeminent esplanade along the water, is naturally beautiful. It is easy to see what Ernest Hemingway fell in love with when he wrote The Old Man and the Sea. But instead of sparkling five-star resorts dotting the landscape, there is rubble and desolation as far as the eye can see. 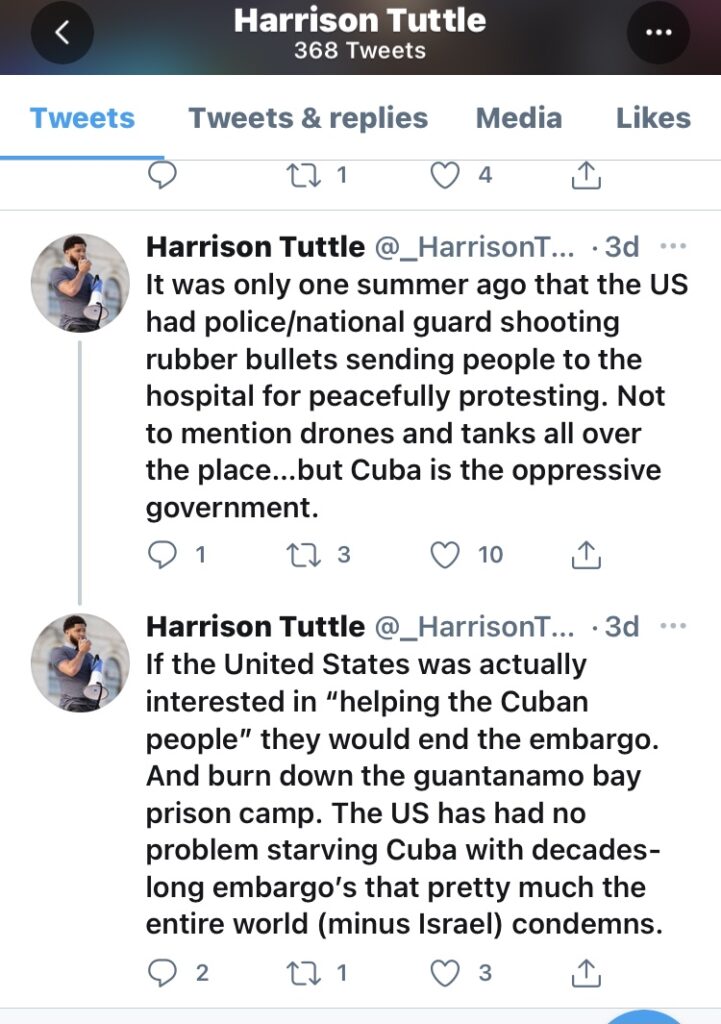 Cubans also lack the most rudimentary of civil liberties. The regime’s internal security service is a thuggish brownshirt militia that beats and subjugates perceived enemies—all without basic procedural norms, such as due process of law. The internet, which is pathetically slow, is constantly surveilled by politburo lackeys. Every time a Cuban steps out onto the street to complain to a compatriot about the struggles of daily life and his general hopelessness at life advancement, he is under threat of being watched and spied upon. 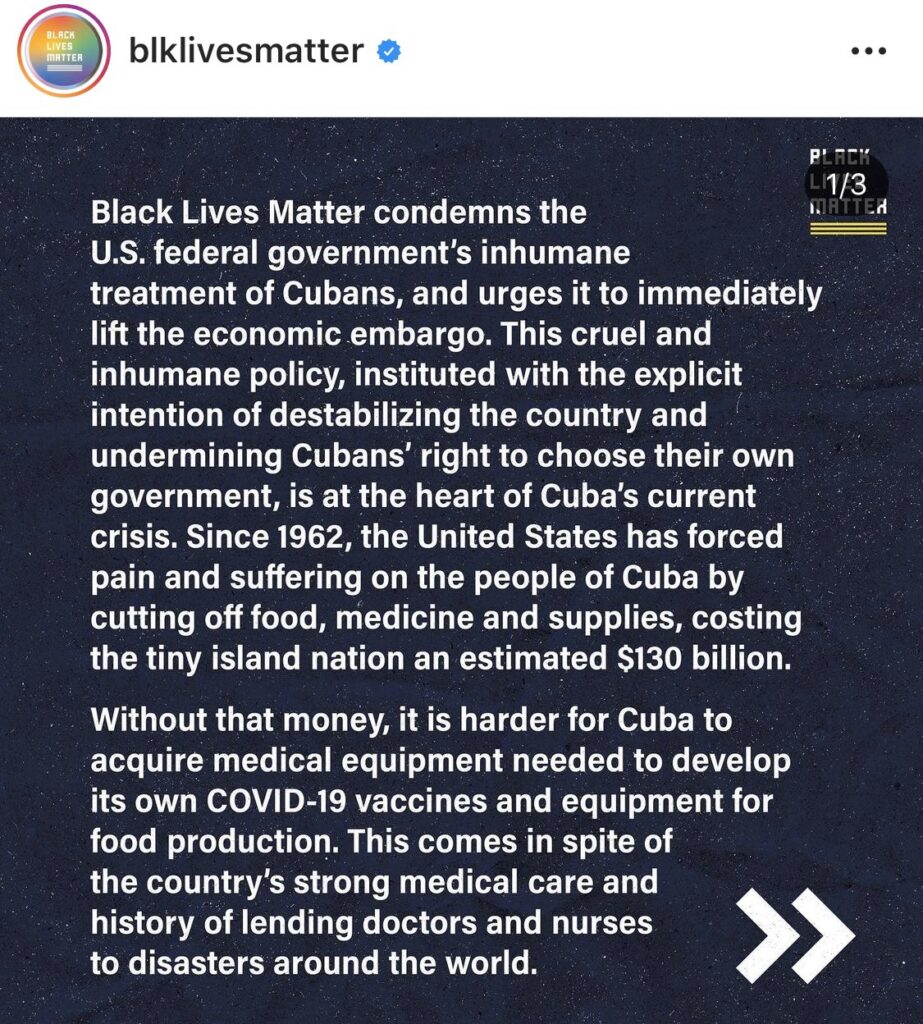 Leftist “it girl” Rep. Alexandria Ocasio-Cortez (D-NY) instead initially opted for deafening silence—but the Democratic Socialists of America, of which AOC is a member, forthrightly tweeted that it “stands with the Cuban people and their Revolution in this moment of unrest.” Black Lives Matter, apparently not content with the $1 billion to $2 billion in paid insurance claims from last summer’s riots that it helped spawn, condemned the U.S. for “tr[ying] to crush this Revolution for decades.” That a large portion of Cuba’s tyrannized populace is itself black appears not to have crossed BLM’s mind. 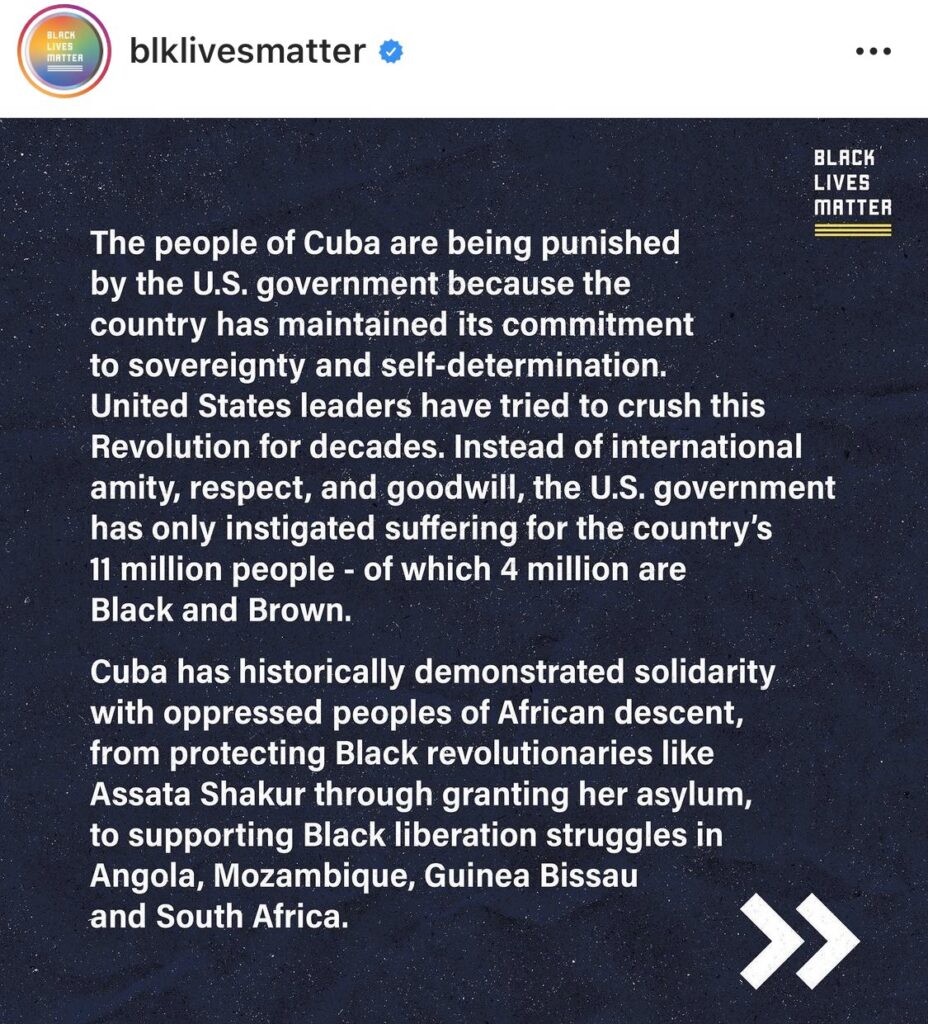 As Jeffrey Scott Shapiro, former director of the U.S. Office of Cuba Broadcasting, detailed in a February op-ed at Newsweek, the Cuban regime is, to this date, an unmitigated totalitarian disaster. “Doctors who have tried to escape the island have often faced persecution and harsh punishment,” Shapiro wrote. “In other instances, dissidents in desperate need of medical attention, including cancer treatment, have been denied proper medical care simply because of their political activities.”

Twas the night before Christmas 2019

Can the RI GOP stop Nellie?