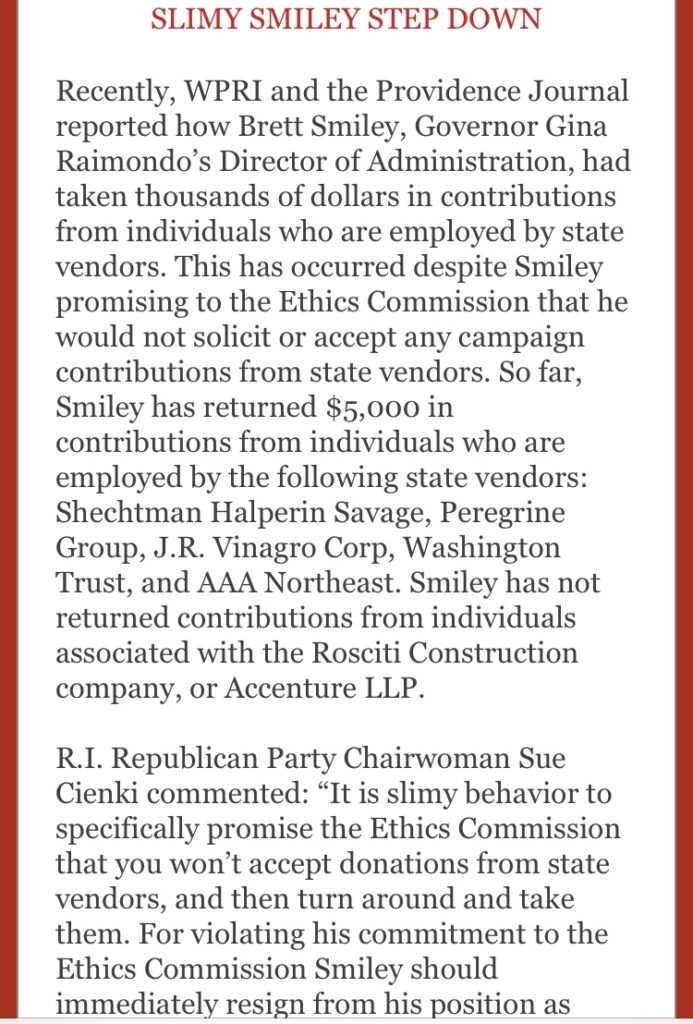 Is the state returning to pay to play? Director of Administration Brett Smiley has come under fire for accepting campaign donations in his bid to be the next Mayor of Providence in 2022. Smiley has been a loyal, trusted aid to Governor Gina Raimondo but has run into the Republican party referring to him as ” Slimy Smiley” and demanding he resign. The Smiley controversy certainly puts pressure on incoming Governor Dan Mckee to make some kind of change in regards to Smiley. The Projo https://www.providencejournal.com/story/news/politics/2021/02/08/ri-gop-calls-resignation-raimondo-administration-director-smiley/4429813001/and CH 12 https://www.wpri.com/video/smiley-refunds-another-3500-of-campaign-donations-tied-to-state-vendors/6263252/have been all over Smiley who promised not to take campaign contributions from state vendors but has been recently grabbing them in abundance. Several vendors have complained of feeling ” obligated to donate” since they are doing business with the state. One vendor claimed, ” when Brett called me, I didn’t feel he was asking for the donation. I felt he was demanding.” To make matters worse, Smiley has already caused one person to resign from the Ethics Commission after a meeting with the “ballot king” the sleazy Ed Cotugno. Cotugno exposed the dark underbelly of political corruption during the sleazy Britt trial. If Smiley is hiring Cotugno, can Britt be far behind? Smiley ran an unsuccessful campaign for Mayor in 2014, exited the race when he fell to third place, and cut a deal with Jorge Elorza. Smiley endorsed Elorza who named Smiley his “Vice-Mayor” in return for the endorsement. Smiley left city hall after one-year to become Raimondo Chief-of staff.  Last year Smiley was named Raimondo Director of Administration. Listen to the John DePetro show for the latest.