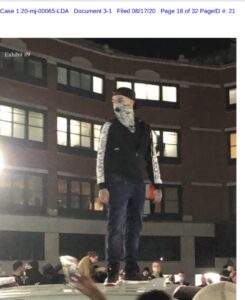 PROVIDENCE – A second Rhode Island man has been charged and arrested for his alleged involvement in the burning and destruction of a Providence Police cruiser during a riot in downtown Providence in the early morning hours of June 2, 2020.

On Friday, Luis Joel Sierra, 34, of Providence, was arrested on a federal criminal complaint charging him with attempted malicious destruction of a vehicle by fire. He was ordered detained in federal custody.

According to court documents, an FBI Joint Terrorism Task Force, Providence Police, and United States Attorney’s Office investigation determined that Sierra allegedly set a Providence Police car on fire by leaning inside the cruiser and igniting a fire with lighter fluid.

According to information presented to the court, it is alleged that Scaglione squirted a flammable liquid into the vehicle, causing the fire to intensify. The cruiser became fully engulfed and was destroyed.

According to court documents, both Sierra and Scaglione allegedly shared information with others about their alleged individual roles in the burning of the cruiser. According to court documents, among text messages allegedly written by Scaglione is a text message where he wrote, “But that police cruiser that went up in flames last night can be replaced… I was pissed. I’ve been pissed. That was pent up years of rage and frustration with the way I’ve seen and been treated by police. That cop car can be replaced. People’s lives cannot… Then I go out fighting and standing up for s**t I believe in. Cuz I know for a fact if it was you or anyone else I was close to I’d burn the whole police force down and not even blink.”

As alleged in court documents, Sierra told another individual that he was one of the individuals responsible for the arson of the Providence Police Department vehicle by applying a flammable liquid to the interior of the vehicle and then using a lighter to ignite the fire. Law enforcement was also provided with several videos allegedly taken on Snapchat off Sierra’s phone and a recorded conversation with Sierra during which Sierra allegedly detailed his actions igniting the fire.

A significant amount of information into each man’s alleged role into the burning of Providence Police cruiser in the form of emails, telephone calls, text messages and video clips was brought to the attention of law enforcement following the publication of an FBI poster seeking information of two persons of interest in the June 2, 2020 arson of the Providence Police Department vehicle.

The two men depicted in the poster have been identified as Luis Joel Sierra (#1) and Nicholas L. Scaglione (#2).

Attempted malicious destruction of a vehicle by fire is punishable by statutory penalties of 5-20 years imprisonment, up to three years of supervised release, and a fine of up to $250,000.

A federal criminal complaint is merely an accusation. A defendant is presumed innocent unless and until proven guilty.