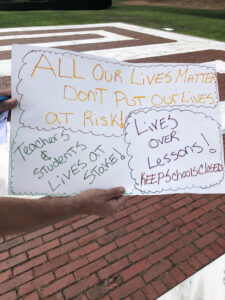 Did they through in the towel?  Although there was talk of a big petition and massive social media presence, about 25 people came out in-person Friday afternoon to the Rhode Island State House to demand that no-school return for in-person learning in Rhode Island.  Despite saying the health risk of in-person classes is too much for teachers, one speaker was seen smoking immediately following the rally. Five or six cars rode by honking horns to support the rally. Sources say the Raimondo team was quietly laughing at the small turnout. One teacher union leader canceled attending the rally for fear of the dismal turnout. Of course, the media made no mention of the sparse turnout compared with any taxpayer group rally where turnout is always under-reported. Among some of the demands made at the rally:

-No school in the state should return to in-person learning.

-Everyone in the state should strike school and work.

-Rent should be stopped across the state.

-They claim thousands of children and teachers will die (and many have but the state is hiding it).

-Attacks on Dr. Fauci ( they claim was paid off by Governor Gina Raimondo).

-Attacks on Governor Raimondo for not responding to their demands.

– Schools and teachers need more money to teach during the pandemic.

-Children prefer to attend school by Zoom and distant learning.

-They were split on whether there is a need for a vaccine before any talk of in-school classes.

Here is a partial video of the rally: