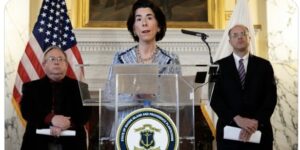 Will the Governor Knock it off and reopen Rhode Island? Rhode Island Governor Gina Raimondo has seen her popularity rise to over 70% but how she navigates the next phase of this pandemic is crucial. There is no debate that Governor Raimondo has received the support of the people and provided consistent leadership through the current crisis. But how much longer should the stay at home keep people at home? The Governor claims the state must remain closed until May 8, but it seems the surge has come and gone. Even Vice-President Pence announced Rhode Island had its surge which was in direct contrast to team Raimondo who claims the surge is still coming sometime next week. So why wait until May 8? A  protest rally is planned for Saturday April 25 (,https://www.facebook.com/events/617299942464245/  ) and the people seem ready to go back to work, go out to eat and get haircuts. As of Monday April 20, the outbreak seems highest among Latinos in Providence and the deaths all now seem to be tied to nursing homes. So is this really a reason to keep the rest of Rhode Island in lockdown?

Gina wins and the unions lose

Will Chafee run for Governor?