Wow. In a rare display of emotion, Rhode Island Governor Gina Raimondo had what many poltical observes describe as a “corona meltdown” over her controversy with New York Governor Andrew Cuomo.  State House sources claim Raimondo has become increasingly frustrated with the amount of national praise and attention being paid to the person she considers to be a Democrat political rival.  Sources say Cuomo was of no help to Raimondo last year when she was Chair of the National Democrat Governors association and would not lift a finger to help her with fundraising.  Sources say in return,  Raimondo mocked Cuomo and felt he was no match for her without his famous last name and famous father. Despite seeing New York turn into “pandemic central,” Cuomo has seen his star rising and a #draftcuomo movement has started on social media and many within the Democrat party feel Andrew Cuomo should replace Joe Biden at the top of the 2020 Democrat ticket. The problem for Governor Raimondo is she was telling friends she was confident Biden would strongly consider her as his VP choice based on the manner she has handled the virus crisis. Rhode Island has much lower numbers of positive cases of the virus due to lack of testing, although Raimondo has tried to whisper to the media it is because she is a “better Governor” than people like Baker and Cuomo.  But then here comes #draftcuomo and as one political insider said,” Gina knows there is no way they are putting two Italians on the ticket. If Cuomo is in, Biden is out and she is out.” 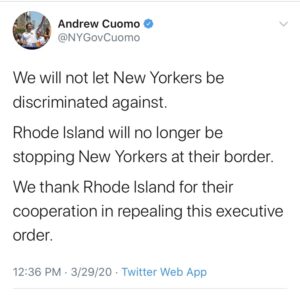 Sources say last week Raimondo was repeatedly complaining to those around her over the amount of attention Cuomo was getting while at the same time people from Massachusetts, Connecticut and New York started to show up at their Rhode Island summer homes to quarantine in the Ocean State. The unprecedented move to hunt down people from New York and send the state police and national guard door to door was based on a temper tantrum Raimondo had and she tried( but failed) to make Cuomo look bad. Instead, it lead to her rescinding her executive order and a complete meltdown at her daily briefing. 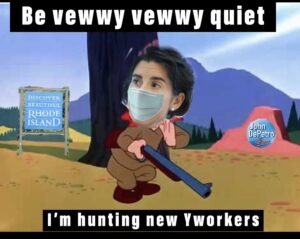 For more on the latest, listen to the John DePetro Radio show.

DePetro.com: Is Mattiello still speaker in his own house?