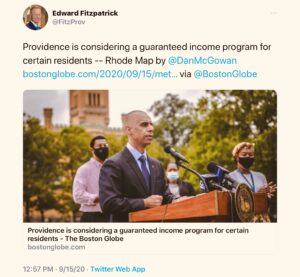 He said he would do it and he is trying. Providence Mayor Jorge Elorza has joined a group of mayors who want to guarantee an income for people doing nothing. For Elorza, it is a chance to fulfill his promise of paying slave reparations in an effort to appeal to Black voters in his bid to be Governor in 2022. It is bad enough the number of people who have jobs with the city and are basically paid for doing next to nothing, but this is another level. A guaranteed income promise from a mayor with no money, no business moving into the city, a pandemic, schools taken away from him, and a downtown still reeling from the June riot. Sounds like a good time to start handing out money. 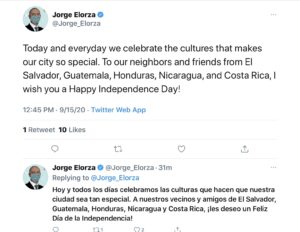 Exclusive: Providence Mayor Elorza refuses to have American flag behind him on MSNBC

GRAPHIC: Video, posted more than an hour ago, shows a police vehicle rolling over someone in Tacoma, WA at 9th Avenue & Pacific. Another video I’ve seen, purported to be from the same scene, shows someone yelling they’re hitting a police car.

Portland: Federal officers retreat backward as #antifa militants in riot gear advance on them outside the ICE facility. #PortlandRiots

Teargas on the streets of Portland as protesters face off with federal agents outside the I.C.E. facility tonight #Portland #PortlandProtests