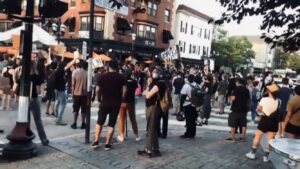 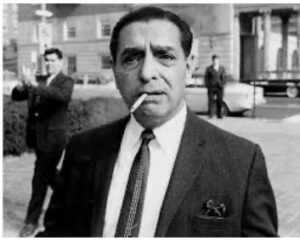 Never would have happened if Raymond were still around. They have no shame. Diners trying to enjoy a lovely summer night on historic Federal Hill in Providence instead received a verbal assault by Black Lives Matter protesters. Screaming obscenities and threatening to ” kill all you white pieces of shit” protesters were led in vulgar chants by criminals and stopped traffic.  One elderly man was knocked down by a black protester when he got up to use the restroom. ” I will stomp your racist white ass,” snarled the BLM protesters. One table of elderly women had their meal ruined as protesters coughed and spit in their food. Several protesters bragged they could not wait for the next riot to burn Federal Hill down. One family with young children was terrified as the protesters screamed ” we gonna kill your white mommy and daddy you little bitch!” One protester said, “let’s defund the police so we can kill all you white Italian assholes. Dis Hill is now Black Lives Matter Hill.” It remains to be seen if Mayor Elorza will rename Federal Hill to Black Lives Matter Hill.  At least three members of the media were seen marching with the protesters in a display of solidarity. Radio host John DePetro was repeatedly taunted and threatened by violent protesters however he declined to comment. Mayor Elorza instructed the police to stand-down and allow the protest.