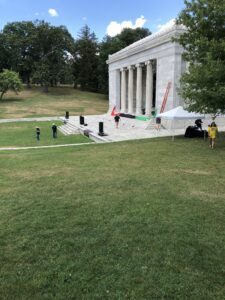 The TV reports talked about music and speeches but the big story Saturday from Roger Williams Park was the no-show of Mayor Elorza. Elorza was set to headline the Emancipation Day event with a major speech to the black community but DePetro.com exposed an appearance by the vicious hate group the  New Black Panther Party.  During the week Elorza pretended not to be aware he was set to appear at a rally with the New Black Panther Party.  On Saturday the organizer of the event claimed Mayor Elorza agreed to speak at the rally but withdrew at the last moment. As a result of Mayor Elorza pulling out of the rally, social distancing was not a problem.

Will there be a showdown at the Rhode Island Make America Great Again March and Rally?

Buddy Cianci's former chief of staff is getting a city contract... to represent a councilman. (Note: The city has already been paying him for this, but this is the first time I've seen it on a contract and supply agenda.)

Idiot take: Breonna Taylor must have been shot because she was black and not because her boyfriend was a career criminal drug dealer who fired at police first, while she was standing behind him.