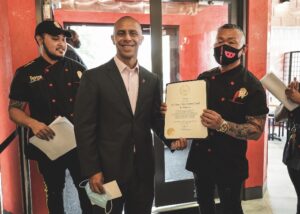 Providence Mayor Jorge Elorza sends a strong message to President Trump that he will not allow federal agents to come and take over Providence from unruly mobs. Elorza has started his 2022 run for Governor of Rhode Island with a series of initiatives aimed at gaining favor with Progressives. Last week Mayor Elorza announced he was seeking reparations for the slave trade that took place in Providence in 1695 and he wanted to defund the police ( even though he has police protection 24/7).  As Mayor, the state has taken over the failing Providence school system deemed one of the worst in the country. The 195 land was taken from Mayor Elorza after he failed to redevelop it. 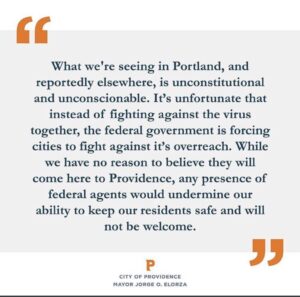 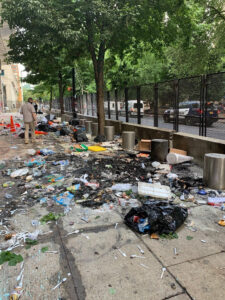 The city of Providence has yet to recover from a riot in June that has left most of the city boarded up and the police gave the mayor a vote of no confidence. Mayor Elorza has started a national campaign to make himself a known figure by riding his bike to city hall and working only four days a week while caring for Baby Omar from home. Elorza stunned Pro-life advocates when he testified at the state house (with his infant son on his lap) that a pregnant woman should have the right to terminate her pregnancy while on the way to the hospital to deliver a baby at nine months.  No word on any response from President Trump. 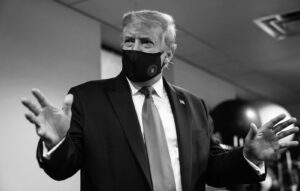 Video: Witness to a murder in Providence