No place in the city is safe as BLM protesters marched to Thayer street on the East Side of Providence and the reign of terror continues. Protesters had a confrontation with police as they attempted to vandalize police cars. Protesters now carry shields, umbrellas, weapons and the numbers keep growing. Mayor Elorza has ordered police to stand-down and not arrest any protesters, even though many should have been arrested the past three nights. Protesters are destroying the City of Providence with no sign of stopping. Protesters vow to protest every night in an effort to bring Providence to its knees. 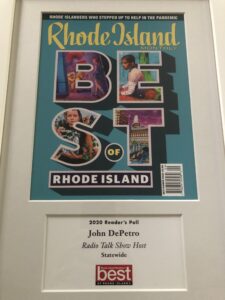 Trump White House memory: a media member told me President Trump had no support in Rhode Island so I began taking questions outside the west wing.

Trump White House memory: on the south lawn of the White House with President Trump and @SheriffHodgson .