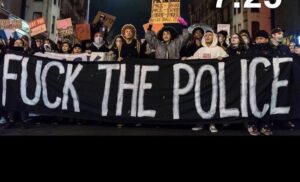 The riot in Providence on June 2, 2020, destroyed downtown Providence with looting, smashed windows, and vandalism including the burning of a police cruiser.  The incident on Federal Hill took place during Providence restaurant week Monday night August 24, with the results just as damaging. The anti-police, Black Lives Matter protesters who decided to descend on Atwells avenue at the plaza and fountain sent shock waves thru out the state. While the complicit media depicted a group of “peaceful protesters” sitting in the street for their moment of silence, the real story is far worse. Over 100 thugs screaming profanity and blocking traffic scared the hell out of anyone there. If anyone objected, they were quickly surrounded and threatened with violence. This was not a demonstration of freedom of speech, this was terrorism making it clear to all that no part of Providence is safe. The mob of thugs will show up at the home of Governor Raimondo and the Mayor. They will destroy the mall and all shops surrounding it. They will fight the police outside the safety complex and terrorize diners sitting outside on the Hill.  This was a different type of crime. This was a crime of instilling fear. Let the word go out to Cranston,  Lincoln, and North Providence that a new mob has arrived on Atwells Avenue and they are not wise guys. The “new mob” tears down statues, torch police cars, set stores on fire, and kills your business. They don’t kill people in the cement shoe way but they kill peace, trust, calmness, and sense of community. The new mob wants to destroy everything good in Rhode Island and replace it with anarchy and destruction. The political agenda is to destroy confidence in police and law and order. If you don’t like a store, you smash the windows. You want to speak with the mayor or the governor, you show up at their home at night, swear at their neighbors vandalize their property and spray paint their home. Mayor Elorza is afraid of them and tries to appease them. We are waiting for an elected official to take them on.

Back the Blue rally planned this Thursday in Providence

We should stop talking about ‘gun control’ and start saying ‘gun safety’.