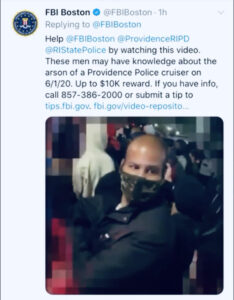 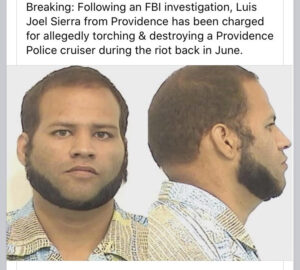 PROVIDENCE – A Providence, RI, man was arrested and arraigned in U.S. District Court in Providence today on a charge of arson for allegedly setting fire to a Providence Police Department cruiser in the early morning hours of June 2, 2020, during a riot in downtown Providence.

An investigation by FBI agents in Providence, the FBI Joint Terrorism Task Force in Boston, Providence Police, and the United States Attorney’s Office determined that Luis Joel Sierra, 34, allegedly set a police cruiser on fire by leaning inside the cruiser and igniting a fire with fluid and a lighter. The cruiser was quickly engulfed in flames and destroyed.

“Senseless violence and vandalism are no way to effect change. The alleged actions of this defendant are indicative of his intent to inflict damage and promote chaos – not to address issues. Not only did the alleged actions of this defendant destroy a Providence Police cruiser, he also endangered the safety of dozens of nearby protesters, as the cruiser burst into flames,” said United States Attorney Aaron L. Weisman.

“As alleged, this man engaged in a deliberate effort to destroy a police cruiser—setting it on fire to send a message—adding to the chaos that put the lives of innocent bystanders in danger,” said Joseph R. Bonavolonta, Special Agent in Charge of the FBI Boston Division. “We will not stand for this type of destruction and violence in our community. Rest assured, the FBI will continue to work with the Providence Police Department and our law enforcement partners to apprehend and charge those who engaged in violent crime under the cover of peaceful protests. After all, violent acts like this one steal focus away from the messages that peaceful protesters were striving to deliver.”

Providence Police Chief Colonel Hugh T. Clements, Jr., added, “We will always support peaceful demonstrations but simply will not tolerate criminal behavior and including individuals’ intent on committing assaults and causing willful destruction of physical structures and property.  Those who believe they can come into the city and cause destruction must know that we will continue to take this very seriously and through investigation hold you accountable.”

According to court documents, the investigation into the circumstances surrounding the torching of the police vehicle was bolstered by video from surveillance cameras, cell phones, and social media, and from information provided via email to law enforcement tip lines, including the Boston FBI tip line.

Additionally, as alleged in court documents, Sierra told another individual that he was one of the individuals responsible for the arson of the Providence Police Department vehicle by applying a flammable liquid to the interior of the vehicle and then using a lighter to ignite the fire. Law enforcement was also provided with several videos allegedly taken on Snapchat off Sierra’s phone and a recorded conversation with Sierra during which Sierra allegedly detailed his actions igniting the fire.

Earlier today, members of the FBI Joint Terrorism Task Force executed a court-authorized search of Sierra’s residence and seized the matching clothing allegedly worn by Sierra on the evening of June 1, 2020 and early morning of June 2, 2020, including a black Caterpillar jacket; white Adidas sweatpants; a camouflage mask; two black gloves, one with a logo on the back of the hand; and two one-handed windshield-style lighters.

The investigation into this matter and other related matters continues.

Arson is punishable by statutory penalties of 5-20 years imprisonment, up to three years of supervised release, and a fine of up to $250,000.