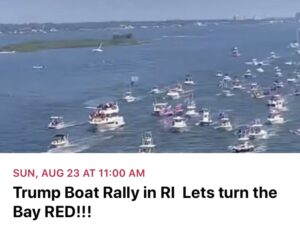 Ahoy! Hit the high sea and support President Trump.  From the organizer:

It is long overdue that Trump supporters in RI have their voices heard. So on Sunday August 23rd, with the approval of the Coastguard,  boaters will take to Narragansett Bay and  show our support for our President”s re-election.
The Trump Boat Parade will start under the Newport Bridge and make its way down to Bristol and then will pass Rocky Point so that land viewers will be able to see the parade and and show support for our President. 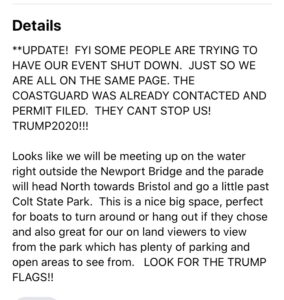 These Republicans who are defensively rage-tweeting “But you’re wrong! I worked my way to pay through college!!” don’t realize they sound like folks who speak of the days when Hershey bars were 5¢ at the general store.

I think there will be a local honk and wave.

I have watched this for 10 mins

We are unanimous! @realDonaldTrump will be our president for four more years!