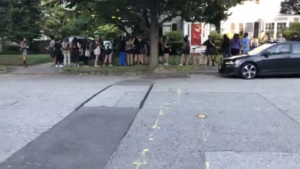 Saturday night was a disgraceful display of uneducated ignorance as defund the police protesters gathered in front of the home of Governor Gina Raimondo demanding a meeting. It did not seem to matter that the Raimondo family was not home, this self-entitled mob of criminals was intent on causing a commotion in the neighborhood. They hid behind masks and used a bullhorn to boom their voices filled with laughter, obscene language, and hate. Yet not one media outlet reported on the extremely foul language used or arrogant demeanor of the group. They threatened the neighbors that unless “Gina followed their fucking orders” they would return night after night. Several neighbors reached out today to DePetro.com to report that when they were asked last night by reporters if they supported the protesters and answered: “no I do not.” They claimed they were met with reporter questions of ” do you consider yourself a racist?’ Several neighbors said they became fearful the reporters would tell the protesters their feelings and they would face consequences. Not one media outlet reported a neighbor expressing their anger at the spectacle although many neighbors claimed they did. Not one media outlet reported that the girl in the car had been arrested on a felony weapon charge. They did not report they were not social distancing. No report most of the 30 were white.  No reporting on loud booming f-bombs for 90 minutes. They are activists, or protesters they are punks. Media reports today described them as just peaceful protesters who stopped by to say hello to Gina.  Only one media outlet provided the truth.

Democrat Governor of the welfare state