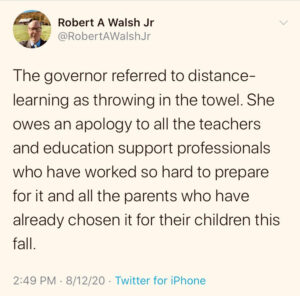 Wow. Fastball down the middle. Rhode Island Governor Gina Raimondo hit the Warwick teachers union hard by claiming the school committee ” threw in the towel” on the refusal to return to in-person learning despite the fact Warwick is considered an extremely low-risk city for the virus. ” They quit and didn’t even try. They didn’t even submit a plan for the youngest students. They quit on the parents and the kids who deserve better.” Raimondo scorching comments came after the incompetent Warwick school committee ( controlled by the teachers union) raised the white flag of surrender and claimed “it is too difficult” to have students in school this fall despite the fact the virus is less than half of 1% in the city.  Warwick teachers are represented by the same teachers union as Providence (AFT) and this pathetic plan is seen as a move of solidarity on behalf of Warwick teachers since Providence does not have a contract and was taken over by the state. John Hopkins prepared a detailed in-depth report on the Providence schools and listed Providence as one of the worst school districts in the country mentioning specifically the focus is on adults and not the students. Warwick is considered an under-performing school district where teachers receive 90 sick days per year. Here is Gov Raimondo:

DePetro.com: Have Rhode Island voters become “ABG”: Anyone but…

DePetro.com: Can Coletta survive at NBC 10?

It is completely disgraceful @AInfanteGreen and @HarrisonPeters that a providence teacher is encouraging burning the city of providence down and looting . Full story on http://www.DePetro.com.