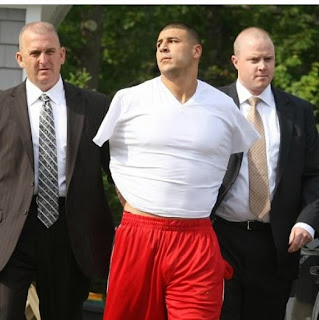 53 guys on the Patriots but Aaron Hernandez hung out with his crew of thugs from Conneticut . His new ” friend” in Boston was a known drug dealer( according to Hernandez girl).  A secret ” flophouse”, rental cars, drug scales,guns and hitting the clubs with known dirtbags. Hernandez liked to be the ” man” where he was the leader of his crew , who he could order ” get up here” and they jumped. Carlos Ortiz was a homeless, dirtbag, petty thief who would do anything to belong. Wallace was a known ” feared” guy who had done time and could handle a gun. It was not enough to be ” the man” in the club. Hernandez liked feeling of being most ” feared ” guy in the club. Guns and drugs.