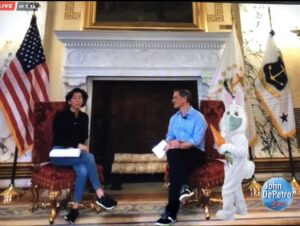 Who says a pandemic can’t be fun?  Wow that was uncomfortable to watch. Rhode Island Governor Gina Raimondo embarked on a bizarre briefing with the First Gentleman complete in jeans and sneakers which is I guess is how they think you must dress when addressing students.  It might have been better if they both walked in and put their sneakers on like Fred Rodgers complete with a sweater. Would they sing a duet? The Gina and Andy show consisted of carefully screened questions from students around the state with plenty of laughs and giggles.  The fact that there were more deaths overnight and close to 100 new positive cases took a back seat to the Easter Bunny and the first couple laughing about their prom. While it was national news the Patriots plane had returned from China with one million masks for New York and Massachusetts, it was Governor Baker of Massachusetts that broke the news Rhode Island would receive 100,000 masks . Governor Raimondo did not even mention the Patriots or Governor Baker during her story hour.

Governor Raimondo had been telling people her team was “scouring the globe for supplies” yet the Patriot plane left from her airport( Green) flew to China and back with supplies for Massachusetts and New York while she seemed out of the loop. Patriot owner Robert Kraft wanted 300,000 masks delivered to New York because he was ” inspired by Governor Cuomo and his handling of the crisis,” however no mention if Kraft was inspired by the Raimondo order of National Guard going door to door hunting for New Yorkers. Ouch. Meanwhile, the local media drum beat gets louder over the Raimondo policy of not allowing the press to attend her daily briefings. Listen to the John DePetro Radio show.

Inside the Deadly Capitol Shooting - The lieutenant was also unaware, those briefed on his account said, that a tactical team from the Capitol Police was climbing the stairwell behind Ms. Babbitt, intending to reinforce the area and clear out the rioters. https://www.nytimes.com/2021/01/23/us/capitol-police-shooting-ashli-babbitt.html

Inside the Deadly Capitol Shooting - The lieutenant was also unaware, those briefed on his account said, that a tactical team from the Capitol Police was climbing the stairwell behind Ms. Babbitt, intending to reinforce the area and clear out the rioters. https://www.nytimes.com/2021/01/23/us/capitol-police-shooting-ashli-babbitt.html

A Trump supporter from Texas who was part of the Capitol raid threatened on social media to assassinate Representative Alexandria Ocasio-Cortez, prosecutors said: https://nyti.ms/369K5rL